– A group, Ebonyi State Indigenes in Diaspora (AESID) has expressed shock over the video while calling for an investigation

A group, Association of Ebonyi State Indigenes in Diaspora (AESID) has expressed shock over a viral video of bags of rice alleged to have been mistakenly sent to Human Rights Radio, Abuja by the Ebonyi state government as a Christmas gift.

In the video, a yet-to-be-identified driver who reportedly conveyed the rice from Abakaliki to Abuja where it was meant to be delivered to a serving federal director was seen lamenting that his payment for the delivery was stalled because he delivered the rice to the wrong address. 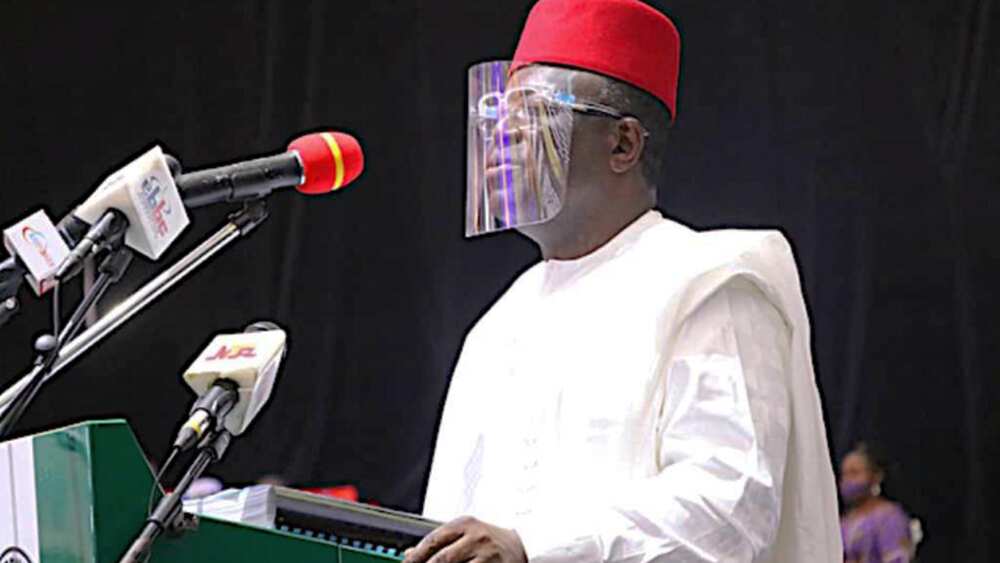 Governor Umahi is under fire from a group in Ebonyi state.
Photo credit: @EbonyiGov
Source: Twitter

Reacting to the development through a statement seen by Legit.ng on Monday, December 28 by its president, Ambassador Pascal Oluchukwu, the AESID said it is troubled by the viral video.

The foremost governance and accountability group described the incident as:

Part of the statement read:

“We also recall that the same Governor Umahi promised civil servants N10, 000 each as their Christmas bonus- a pledge, we reliably gathered is yet to be redeemed as at the time of making this press release.

“We condemn this shameful looting and wastage of Ebonyi’s scarce resources by a man who claims to be a father but has preferred to focus his attention on mere frivolities while using multiple decorative flyovers to deceive some gullible Nigerians.’’

Recall that the AESID had earlier asked President Buhari and the leadership of the APC to call Governor Umahi to order so as to avoid crisis in Ebonyi state.

The group alleged that since the governor’s defection to the APC, he has embarked on accusations, threats, harassments, and intimidation against some elders and leaders in Ebonyi state.

Earlier, the group stated that the defection of Umahi didn’t come as a surprise, stressing that the governor is known for political inconsistency since his foray into politics.

The group further stated that the political life of the governor has become a domesticated case of a study in downright betrayal beginning from his days in the Dr. Ogbonnaya Onu campaign directorate in 1999.

Similarly, the group recently alleged that there are plans by the Ebonyi government to intimidate politicians in the state who refused to defect to the APC with Governor Umahi.

The group said the recent comments made in various functions by the governor were disturbing, hence it called on the federal government to prevail on Umahi not to heat the polity in the state.

In a statement sent to journalists and seen by Legit.ng on Wednesday, December 16, the group alleged that the state government was planning to frame-up and rope-in some key political actors in opposition parties.