After man ‘bought’ a house, he proposes to his girlfriend in front of it with style, the lady’s reactions got people talking (photos)

A couple has created a buzz on Twitter after their photos surfaced on the platform. On Thursday, December 24, a lady with the handle @HighOn_leighh said she said yes to her lover.

She revealed that the man popped the marriage question in front of their new home. She added that she will always love him.

The four photos she shared show she and her lover. In one of the snaps, the man kneeled as the lady held his hand.

Another shot has them standing in front of their house with a background designed with white balloons and ribbons that read “CONGRATS”.

However, the lady did not specifically say if the man bought the house or the building is rented one where they would be starting a new life.

As at the time of writing this report, her post has received over 35,000 likes with thousands of retweets.

“The house was his at first “in front of his new home”. …now that you said “YES” it’s you guys own. Congrats btw!” 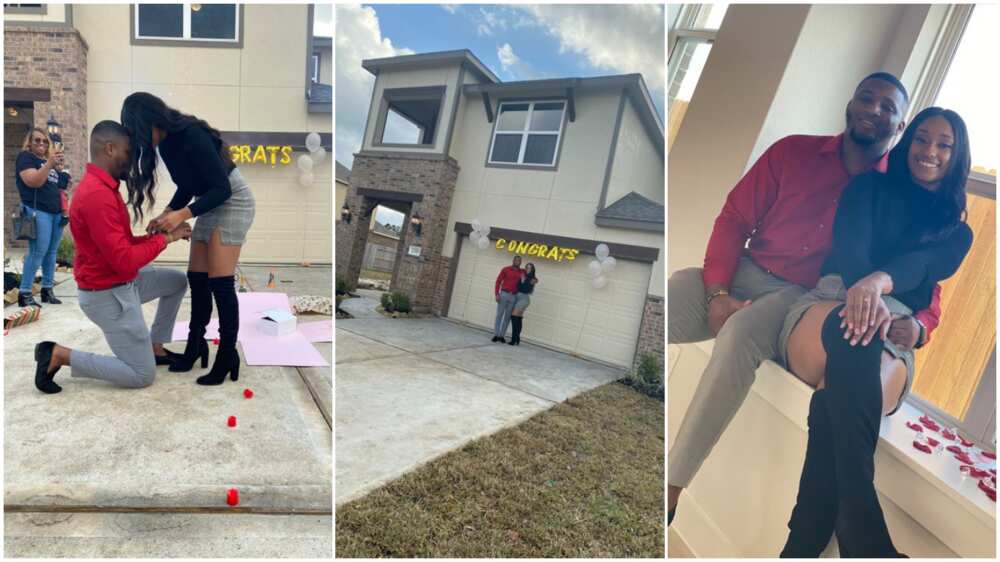 “This one wey everybody dey marry like this.. you sure say husband still dey for me?”

“He really worked hard for that house.”

“Congrats babe, God I need this kind of testimony.”

“Congratulations on the new home and the engagement what an exciting time may God bless your household and your union and grant you both much love, success, and longevity!”

Meanwhile, Legit.ng earlier reported that a young man took the game of public marriage proposal to another level as he decided to ‘create’ a spiritual aura around his.

He decided to pop the question while his bae and other people were in a heated prayer session. As the prayer went on, the man went down on one knee.

When the lady opened her eyes, she could not believe what just happened and ran away, perhaps in great excitement as people asked her to come back.

Which will you marry; the lady who stood by you or the one who made you rich? | Legit TV